Join us for this month's member briefing webinar which will feature a briefing by the 2022 AmCham Shanghai Doorknock Delegation. AmCham Shanghai held its annual Doorknock delegation in December and met virtually with US Senators, Member of Congress, and leaders from the Department of Commerce, USTR, and Treasury. During their meetings, the delegation provided a briefing on the business environment in China and the important role played by American businesses in supporting US national interests. They also advocated on behalf of the membership for more discussions between the US and China.

The delegation members will brief on the results of their meetings and provide insights on the state of US-China relations.

This event is held virtually. The Zoom link will be provided via email 48 hours before the event day.

*Please note that the event is strictly off the record. Members should not record or share the content of this briefing via email or any form of social media such as WeChat, Weibo, LinkedIn, etc. Members who violate these rules will be subject to disciplinary actions. Cameron has over 20 years in management across various industries in China. He drives the consulting and advising initiatives at TidalWave Solutions, and is a Professor at New York University where he teaches Leading Global Organizations and Project Management.
Cameron’s expertise focuses on developing strategy in difficult business environments, executing across all functions, turning a business around to profitability, and operational excellence across a global company.

Cameron was the Asia General Manager at a leading carbon fiber manufacturer for 7 years, where he delivered an average of 48% annual revenue growth. He was also the Operations Director for a global sourcing and risk management company, and served as Business Manager at Microsoft.

Cameron participates extensively in the American Chamber of Commerce. He served as the Chairman of the Aerospace Sub-Committee in 2015-2017, and Co-Chaired the Future Leaders Committee in 2016-2018. He is currently Vice Chair of the Manufacturers’ Business Council, and an advisor to the National IDC Industrial Technological Innovation Strategic Alliance, a China based technology association. Assistant Professor of Practice in Finance at NYU Shanghai, and Senior Advisor at The Asia Group (TAG)

Han Lin is an Assistant Professor of Practice in Finance at the NYU Shanghai. In addition, Han is the China Senior Advisor to The Asia Group (TAG) drawing upon nearly 20 years of in-country experience in China’s financial markets and corporate strategy.

Han holds advanced degrees, including an MA in International Studies from the Johns Hopkins School of Advanced International Studies, an MS in Global Finance from HKUST-NYU Stern, and an LLM in China Civil and Commercial Law from Fudan University Law School. He completed his undergraduate degree in business (BBA) at the University of Michigan in Ann Arbor.

Han is active in the American Chamber of Commerce, Shanghai, having served on the Board of Governors and as a former Chair of the Chamber’s Financial Services Committee. He previously served in both the U.S. Marine Corps and Peace Corps (RCPV Ukraine). Han lives in Shanghai with his wife and two daughters. Sean Stein is a senior advisor in Covington’s Public Policy Practice Group. Prior to joining Covington, Sean served as the U.S. Consul General in Shanghai. He has over twenty years of diplomatic experience in Asia and has served in leadership positions in China, Washington, and the region. His insights informed policy making at the highest levels in Washington and he assisted dozens of U.S., Chinese, and international firms to develop strategies, manage risk, and identify opportunities for growth in response to the changing U.S.-China relationship.

Sean, a non-lawyer, is a key resource to businesses on issues related to political risk, public affairs, problem solving, and communications. He regularly assists companies facing acute or long-term issues to resolve them, often through discussions with U.S. and Chinese government officials. He is well placed to provide strategic advice to U.S. and international clients on issues relating to securing market access and protecting investments in China, assessing risk, navigating trade controls, sanctions, and supply chain restrictions, and resolving disputes and regulatory investigations. Prior to joining Milliken, Ed received a B.S. in Polymer Chemistry from the University of Science and Technology of China and a PhD. in Organic Chemistry from the Georgia Institute of Technology. Ed has been with Milliken for 25 years, holding a variety of technical and business leadership positions, including Director of R&D for global chemical business, Director of Sales, and Region Manager of Asia chemical business. He was appointed to Milliken Asia Managing Director in 2011, where he oversees all Milliken businesses in Asia. Ed is a member of The American Chamber of Commerce in China and a member of the American Chemical Society. 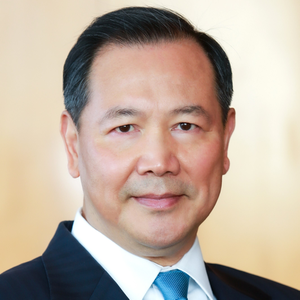 Eric Zheng became the President of AmCham Shanghai in 2022. He has been involved in the Chamber for over 15 years as a member, committee leader, Board member, Board treasurer, Board secretary, and Board vice chair, and Board chair (2018 and 2019).
Eric brings a unique combination of private and public sector experiences to the presidency. He worked in management consulting with PwC in the U.S. and later served for the U.S. Department of Commerce as the principal commercial officer at the U.S. Consulate in Guangzhou. Eric had a long career with AIG in Greater China and held a series of positions that culminated in his service as CEO of AIG China. He then chaired the board of Heng An Standard Life Insurance Company.
In volunteer roles, Eric serves as the Greater China regional chair of the Committee of 100 and as a board director of Shanghai Make-A-Wish Charity Foundation. The Shanghai municipal government has granted Eric its Magnolia Gold Award in recognition of his significant contributions to the city. He holds a bachelor’s degree from Fudan University and an MBA from Georgetown University.

This is a member-only event. If you are not a member but would like to join this session, please contact michelle.li@amcham-shanghai.org or 021 61693017.